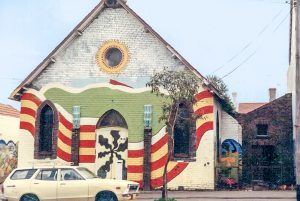 Dickson St Space is an independent art and cultural venue which is owned and operated by Inner West Cultural Services, a non-profit, community-run organisation. Since 1974, we have partnered with the local community, government and artists in a wide range of projects with far-reaching outcomes in terms of building community and creative expression.

The venue’s origins lay in the 1970s when a group of locals formed Kids Activities Newtown (KAN) to provide children’s services. One of our early initiatives, the Magic Yellow Bus (now under the care of Inner West Council), celebrated its 40th anniversary in 2015 and is still much beloved by the families of the Inner West.

In 1976, KAN purchased a disused Anglican church on Dickson Street, Newtown. Built in 1913, St Columb’s suffered a fire in 1950, and the building sat derelict until the 1970s. The Sunday School across the courtyard, built in the 1930s, still stands and is now home to the Newtown Yoga Room.

The architects Swetik Korzeniewski and Paul Desney designed a new building to link the church and Sunday school, providing space for an office, kitchen and pottery room. They also designed a new north wall for the old church building, creating a multi-functional space which is today our main hall for hire. A mural announcing the new community use of the former church decorated the Dickson Street facade of the building.

During the 1980s the organisation developed an increasing focus on community art projects, initiating several major projects such as Walking the Street, Mapping Marrickville, and the Boarding House Music Project.

In 1998, our name was changed to Inner West Cultural Services to reflect the broader geographical and cultural scope of our work. We continue to serve the community as a creative sanctuary, caring for our historic buildings, nourishing ideas and providing space for community local culture to grow.